The PLM State: PDM and PLM - A Great Strength Can be a Great Weakness

Have you ever heard the saying “Sometimes a great strength can become a great weakness?” Here is an example of that as it applies to the PDM/PLM space that we at ZWS inhabit.

A great strength of PDM/PLM: Easily vaulting your 3D MCAD models into your PDM like, SolidWorks Enterprise PDM or your PLM, like Agile with Engineering Collaboration. Now the entire product design group has access to the latest revision of the product’s 3D definition.

Many designs include 20% -70% purchased parts and many outside vendors have created 3D models of purchased parts. Product designers will find these purchased part 3D assemblies on the web and put them in the vault as part of their overall design.

And. . . a great weakness: Purchased parts modeled by outside vendors are now in the vault. The problem is that many vendors will model features that are irrelevant to the design team, like threads in holes, all in the pursuit of “accuracy.” 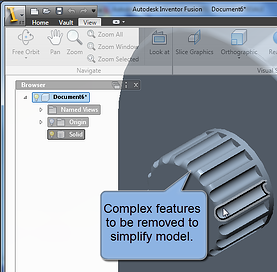 Unless someone reviews that purchased part model or assembly with file size considerations in mind, those purchased part detailed models get placed in the vault structure and you can end up dragging around a 40 MB part file, when you can get the same value from a 1MB file of that part.

The more distributed your environment is, and the more those unnecessarily large files get transferred around your network, the worse the problem gets!

Think about this - two years after the release of the design, someone in sustaining engineering needs to change a washer from the top level assembly and now all the 3D CAD models need to be loaded into memory, and thus across your network, just to replace a washer. The customer value added activity- new washer- takes two hours, when it should - take 5 minutes, because of the large 3D CAD models of purchased components.

Then the project manager gets upset and demands that IT increase the network bandwidth, and we all know how much that costs.

At least one person in your checking group or engineering team needs the CAD skills to be able to De-Feature 3D models. Solidworks has specific functionality for this while maintaining mass property integrity, as do other 3D CAD systems. When a member of the design team wants to add a purchased part to their design and thus put that purchased part into the released state of the vault structure:

It is not too much to ask product designers with competent CAD skills to perform this step themselves, or you can designate a specific person or persons to review purchases part models prior to making them available to all.

The important point is to incorporate a best practice right into your workflow process, and stop the problem at the source.

Thus one of the greatest strengths of a PDM/PLM system—that product designers can easily put their 3D CAD models into a vault structure to share with other members of the product design team, won’t become a great weakness, “The file sizes of purchased part models are killing our productivity!”

Learn how to integrate PDM and PLM with EC or DesignState